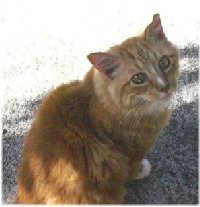 My Balou's brief struggle against a fast growing tracheal tumor ended this morning at 5:30. That represents a single moment of tragic loss for me. However, after only hours, I find myself focused not on that single moment but on the thousands of moments throughout the extraordinary life of an amazing little spirit. Some of what I will share is sad, but they are certainly testaments to his strength, love and compassion.

Balou began his life with great challenges. With the help of a good friend and the local police department, I rescued Balou from a brutal animal abuser who cut Balou's right hind leg off when he was only hours old. I knew the second I got him home and he laid down in the palm of my hand and took a bottle... that we were connected by the heart for the rest of our lives. He recovered beautifully and it was clear very soon that his love, compassion and nurturing nature were truly extraordinary. Balou loved everyone, everything and so loved life.

When Balou was 3 he began to suffer painful bouts with his partially amputated leg. I thank my loving Vet who patiently helped him through this. I have always had other animals in the house and even during this time of pain and struggle, Balou continued to care for and nurture his "siblings". Just when we thought we might have to surgically remove the remainder of his leg, Balou began to recover, never again to feel any reminders of that traumatic attack on him.

When Balou was 5 he ventured outside (he was strictly and indoor cat). We searched, knocked on doors, combed the neighborhood the entire day. A couple of hours after we got home, we heard scratching at the door. Balou was terribly injured. The mobile vet (thank you Donna) was at the house in record time. He had been hit by a car, his hips were broken, some internal bleeding and several deep wounds to his face. The Vet was astounded. Balou, in very critical condition had somehow managed to crawl home, pulling himself by his front paws. It took him 4 months to recover, gradually beginning to again put some weight on his one back leg. Not for one minute was he mean or bitter, even through all that pain. He continued to love and nurture his people and his "siblings".

When Balou was 9 he got a very bad cold. We began treating it with antibiotics but very late one night he was clearly having difficulty and I got up to realize that there was something seriously wrong with his left eye. I took him to the emergency hospital and they told me they would probably have to remove the eye but they were going to try to reach a specialist. An optical surgeon (Bless You) got out of bed at 2:00 am and met us at her hospital. She worked on Balou for hours and treated him subsequently. She not only saved his eye, but a surprising percentage of his vision. It was a month of difficult treatments for Balou and again he was steadfast in that unwavering strength and will.

Balou's "siblings" have not always been cats. He grew up with Icobod (male cat). Even though Balou was younger than Icobod (now 16), he cared for him like a doting mother. If Icobod was outside, Balou waited at the door for him and yelled at me if he thought I let him stay out too long. Two of his siblings were rather large lizards (iguanas). Balou (my amazing angel) could not hold back his love and devotion even to them. He played with them, watched after them and even held them down to give them a bath. When one of the lizards was still quite young, he had somehow gotten out of his cage while I was at work. I came home to find Balou standing over my lizard on the living room floor. He kept the lizard safely under his belly and was keeping Icobod (who had obviously taken a swipe at the lizard, leaving a bruise on him) at a safe distance. No telling how long he was standing guard over him until I got home.

Balou... my miracle son, you have blessed my life.

April 25, 2004 - sent in by Megan Donovan
Balou is survived by (his people) Mom, Tara, Erin and Deven... and by (his siblings) Icobod, Lestat, Pandora, Merrick, and Maurius.