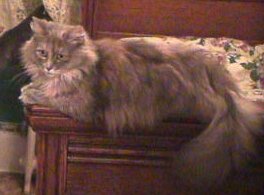 It has been a hard week. I've done much crying and soul searching about what happened and all of those people that died in the four planes, the World Trade Center and the Pentagon building, not to mention all of the brave fireman and police officers who died trying to save people.

I can't make much sense of it all and I'm afraid of what the future holds for us all. I have said many prayers for all the victims and the family and friends that must go on now without their loved ones. I see how stressed out everyone is and how some of my friends are fighting over what should be done rather then sticking together and seeing what we can do to help.

Things got really bad an hour ago and a weeks worth of stress and pain came out. I decided to do the one thing that always makes me feel better... I went to touch my sweet animals.

I lay down on the bed with my sweet kitty Momma Catherine Faye. For those of you who don't know, she is the sweet stray cat that we tried for 5 years to catch. When we couldn't catch her we trapped all of her babies who now have a happy home here with us.

The minute I came in the room it was if she sensed my sadness and grief. She purred and rubbed against me as if to tell me she understood. Then I began to think about her and the horrible life she endured outside and realized that she did understand. I began to think of all her wonderful qualities and all of the things she's helped me to remember.

The first thing she's taught me is fearlessness. For 5 years this little girl hasn't had the luxury of being scared. She couldn't let fear of dogs or weather or people keep her from taking care of herself and her young. When we would put food on our porch for her she would sneak up to eat it but more often then not our dog would bark ferociously out the window at her. She had no way of knowing t hat he was barking because he couldn't figure out why she wasn't in the house with us and the rest of her kids. She would watch nervously and would eat as quickly as she could so she could get out of there before someone hurt her. She must have been terrified but never let us know that.

The next thing she taught me was strength. Even though she was 5 years old she was barely bigger then most of her kittens. Her tiny body was never nourished enough to grow the way it should. Even with her tiny size she was as strong as 10 cats. We found that out when we tried one of the last times to catch her.

We had given her something to put her asleep so we could sneak up and catch her. It should have been enough to put a large dog down but not that strong little lady. We watched nervously as she started to swagger and tip over. When she finally laid down, overcome with exhaustion, we snuck out to get her only to have her wake up and run right past us so fast that I don't think an Olympic sprint runner could have caught her.

I'll never know how such a tiny little thing had the strength to outrun us even though she was drugged. Maybe it was because she knew she had two little babies in her belly that she needed to protect and no human being in her life had ever treated her with anything but hatred or pity.

Another thing she taught me was resourcefulness. We tried to feed her every day but many times the fat neighbor cats (the same ones that kept getting her pregnant) would eat all her food. If we weren't home to give her more food she had to depend on her hunting skills to feed herself and her babies. I know more then once she's torn our garbage apart looking for something to eat and when there was nothing would bring home small critters to eat. Most of the cats we've had have never known the taste of a mouse and I've found that sometimes they aren't even satisfied with a cheaper can of cat food. I can't imagine what they would do if they suddenly had to depend on themselves to hunt and kill food. I imagine most of them would starve but not my little Catherine. Even when she was skinny her babies were always fluffy and plump and healthy looking. She had to learn to eat salmon one day and a mouse the next.

She's also shown me such an intelligence. She was smarter than us for 5 years! I don't think a week went by that we weren't outsmarted by her. We still don't know how she's done it but we would come home to find the safe traps sprung and all the yummy salmon gone but no Catherine. One time I watched as she carefully walked into the trap making sure to not step on the trip plate. I wanted to cry that we were so close to catching her and didn't. When she was done eating the tunafish she carefully backed out of the trap once again stepping over the trip plate. I guess she knew what the trip plate did since she had lost every one of her babies to that trap and she was too smart for it. She didn't make it 5 years on the street by being stupid.

As much as she depended on herself she also seemed to know the meaning of the word teamwork. On two different occasions when she had two separate batches of kittens we saw her working with other cats. We still aren't sure if they were the father's of each litter but she put them in the roll of father and they seemed to be happy to do it.

The first time was with her first litter of kittens (all of which we still have). We noticed a very large tom cat hanging around her right before they were born. We would see the tom go over to where the kittens were and Catherine would leave him to baby-sit while she went off to hunt. The tom certainly didn't get fat from mice since he seemed to not understand why she was coming back with mice to eat. The kittens would follow the tom around and when we trapped the last one of them he cried at our door for two days. Eventually my brother mistook him for one of our cats and tossed him in our door and that's how we got our big, fat Jeramiah. He still takes care of the kittens Catherine had him watch over.

The second time was with another sweet tom. She would come back from hunting and rub up against the tom to thank him for the baby-sitting. This tom also cried when we trapped the two kittens and we brought him in. We named him Jamie and he still grooms the two kittens he watched over for Catherine. I know it must have been hard for her to share her kittens but she did it to make things better then her children.

She's shown me that when things seem unbearable I should never give up hope. She had such a miserable life but I don't think she ever gave up hope. After 5 years of trying to catch her I had actually given up hope. We had tried everything and the day we tranquilized her and still couldn't catch her I cried. I told Jim I couldn't do it anymore. It was too painful to get my hopes up and not catch her.

Later that evening he said she was on the porch and he wanted to try one more time to catch her. He said he would do it with the bass net and I told him I couldn't bare to go through failing again. He begged me to just stand at the door and keep her attention while he snuck around behind her with the net. I stood and talked to her and was sure she would see the shadow of Jim behind her. He brought then net down and I don't think I ever dived so fast out a door. I held that net together with everything in me. She was a mass of claws and teeth but I didn't even notice the several bites and scratches she gave me as I brought her into the house. I had given up hope but thankfully Jim never did. I've learned from that to keep hope even when things seem unbearable.

Since I've had this little sweetie in my life I've learned even more. I've learned the meaning of patience. It took patience to catch her and even more patience to make her realize she's safe and loved. She's taught me appreciation and to be thankful for the good things in your life and to have compassion for other's. Not a day goes by that she doesn't thank me for all the wonderful things I've given her. She showed me humor and makes me laugh with her silly antics. I know when I'm down I can count on her to do something funny like chase her tail or roll over and accidentally fall off the bed.

She's showed me friendship and I love to cuddle with her for hours and listen to her purr.

Most of all she's showed me love and trust. This little girl has known nothing but pain and agony for 5 years of her life. She had no reason to trust me or any other human. People were the creatures who threw rocks at her when she was in their gardens and garbage cans. She had no reason to love me or trust me yet here she is laying with her belly up in the air for me to scratch... the ultimate sign of trust. She just purrs and kneads her paws in the air.

I've realized today that these are qualities I have to remember and strive for.

I know these times are hard and have seemed unbearable this last week. I can't do anything about if we go to war or not. I can't make things go back to the way they were or bring any of those people back. What I can do is try to work on the qualities that Catherine helped remind me of today. I can also take care of all the sweet animals I have and try to make their lives be as normal as possible. I can pray that things will work themselves out and that all the victims will find comfort.

Most of all I can make sure to never give up hope that God will make all things right in the end. I know many of you have rescue animals as special to you as my sweet Catherine Faye. Why not listen to them and let them tell you how to deal with this tragedy. Rather then fight with each other over what should or shouldn't be done in a situation we have no control over, why don't you love your sweet animals and let them help you to heal your heart.

Kindly Contributed By:
Michele Propes on October 16, 2001, one month after the September 11 tragedy in New York City.