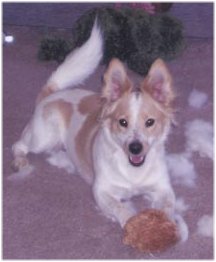 August 31, 2003 was a day that changed the lives of my husband, the kids and me. That was the day we found 6-month-old Chloe. We found her trying to get off a highway after she had been hit by a car. We stopped to help and little did we know just what we were getting ourselves into. After rushing her to a Veterinary Hospital; we found that we had a difficult choice to make. We could either take on full responsibility of the dog (which would include an estimated veterinary bill of somewhere between $2,000 - $3,000) or we could relinquish her to animal control. With tears in our eyes we, unfortunately, had to let the local animal control take over. But, the story didn't stop there.

Over the next few days, I stayed in contact with animal control to find out the status of this beautiful little dog that had stolen my heart out on that highway. I ended up finding out that the only injury she had from her accident was a broken front leg. Still, the veterinary bills were being estimated at far more money than my husband and I could afford, because on top of the broken leg she was found to be suffering from kennel cough, intestinal worms and Lyme disease. That was when I started looking at my other options.

I quickly learned the undeniable truth that many "no-kill" organizations just don't have the funding to take on the responsibility of an injured animal. There are thousands of animals a year that get put down and can't be saved that are completely healthy. Most organizations just can't realistically pass over a bunch of healthy animals in order to fund the care of a sick one. Likewise, when most people decide to adopt a new pet, they don't want to take on the responsibilities associated with a sick or injured animal, when they have many other healthy animals to choose from. This poor dog was quickly put on the unadoptable list at the animal control facility and was slated to be put down.

I knew that if I didn't do something, she was going to die. I had looked at many options and had not yet found an answer when it came down to the last 48 hours before Chloe was to be put down. It was then that a co-worker suggested I send out an office-wide e-mail telling the story of this dog and asking for any help that I could get. I was desperate enough to save Chloe, so I did just that. Within a few hours of having sent out the e-mail, I had more than enough money to take care of her bills and ultimately save her life. Just days before she was going to be put down, my husband and I went into animal control with the money and paperwork needed to adopt this beautiful dog. At the time, we were just planning on adopting her in order to save her from being put down and then we would look for apermanent home for her when she was healthier. We never thought we would keep her.

On September 18, 2003, nearly 3 weeks after we found Chloe on the highway, my husband and I brought her home. That day was also the day that hurricane Isabel came through where we live, and "hurricane" Chloe stepped into our lives for good.

Before all of this happened, I was never really one to want a dog. I actually never had one in my life before and now I can't imagine life without her. I never thought that I could feel such intense love for a dog, but adopting Chloe has changed my husband, our kids and me. She has a brought a light into our home that is indescribable. The joy that she brings us is immeasurable; and we would go through everything all over again just to even have a moment with her. How lucky we are to have her for her lifetime.

- Thanks to Lisa Abend for sharing Chloe's story with us.