Night of the Missing Iguana 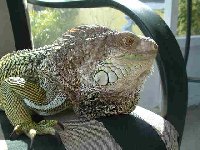 Loving lizards is an acquired taste. As a child I was always fascinated with the little creatures. Besides crawling outside the screened-in porch of my Florida home with their flicking and bobbing heads, I witnessed spotted geckos sticking to windows and walls with their suction-cupped fingers. Strangely, they grunted in a low pitched tone on humid nights.

Growing up, I couldn't learn enough about lizards. To me they were small dinosaurs deserving of respect. Being a female, my interest in lizards often surprised people. Never afraid of them, I came to discover that there were literally thousands of varieties with varying shapes and unusual colorings.

My favorite reptile was one of the largest, the giant Green Iguana. With brown striped tails, giant spikes on their head and back, razor sharp nails on alien-looking, multiple jointed fingers, these creatures intrigued me. Native to South America, Iguanas run wild in many areas of the Dominican Republic, Equator, and Galapagos Islands. Even in the tropical paradise Cancun, they swim in hotel pools and bury their giant long bodies in the sand underneath the sidewalks. Males can grow over six feet long.

Finally I obtained a six inch baby. Immediately I learned that these lizards don't think of themselves as pets nor do most other people.

"What the hell is that? It's face looks like a frog and it's got a snake tail and a fat tongue?" A friend asked. "Is it venomous?"

"Can it shoot those spikes off its head and back?" another questioned. "Isn't that a pest, not a pet? It looks like a bunch of different animals stuck together. Don't they feature those in Japanese monster movies? Why don't you get a normal thing like a dog?" others derided.

Most of my friends didn't enjoy Jamison's presence or touching him. Either some refused to go out on the porch when he was there or stand near his indoor six foot cage. Although Jamison presents a very frightening appearance, he has developed a sweet personality, eating right from my hand and licking my face. On the porch, Jamison befriended other native lizards and was easily trained to use an empty litter box. Over the years he grew to be a family member; he also grew to be nearly four feet long.

One misty morning, I walked out to the patio to discover his custom made shelf was empty. Nearby, the screen which once sported a very small tear, now was completely ripped out. Finding him missing, I cried out in horror. "Jamison!"

Immediately panicking, I knew what dangers lurked out there. With so many neighborhood dogs, cats, wild birds and raccoons, any one of them could take a bite out of my brilliant green reptile. With his striped tail, he could easily be spotted in the grass. Fearing the worst, I handed out flyers to neighbors, only to find a couple of my Hispanic neighbors ate Iguanas in their southern homelands. I certainly didn't want him to become a main course. I alerted the animal shelters, handed out missing posters, called the police, and animal shelters -- anyone who would take a report. I pleaded for a call if a four foot lizard was spotted. I couldn't risk people hurting him because they thought he was poisoness or dangerous. Jamison was a kind-hearted lizard who didn't hurt anything! He wasn't even a bug eater like other reptiles; Jamison ate vegetables, leaves, flowers and fruit. Unfortunately, he looks threatening.

As hours passed with him gone, my fear increased. Family and friends tried to console me. Some even helped my husband and me search with binoculars. Looking up trees, shaking bush branches and studying the ground, we continued, desperately trying to find him.

"I'm sure he'll come home when he's done exploring," my husband attempted to comfort me.

During the night of the missing iguana, I hardly slept. There was a terrible storm, one of the worst Florida had seen in awhile. The wind pounded against the windows. It was even rather cold and iguanas need to stay warm to keep alive! This would have been a night I set up his heat lamp in his indoor cage. Now he was out in the rain and the chilling winds! Would he even survive the storm?

The next day my husband Louis went to the back yard to trim the bushes. "I'll watch where I step and keep looking," he promised.

Rushing outside, I could hardly believe my eyes. Trotting across the grass and heading straight for his porch was my beautiful Green Iguana. With his three foot tail raised, Jamison actually looked happy to be plodding on home.

So the next time anyone asks me, "Are lizards pests?" I'll remind them of Jamison, who is incredibly intelligent, potty trained, and able to find his own way home all on his own. He shakes his tail, bobs his head in his own way of communicating. Knowing him makes the whole world feel a little smaller. I now appreciate that even a giant Green Iguana with a frightening appearance can be incredibly smart and loving. Unusual looking creatures only serve as a reminder, that nature (God) doesn't make mistakes.

Contributor Biography:
Michele Wallace Campanelli is a national bestselling author. She's been published in over 31 anthologies and has penned many novels, including Keeper of the Shroud and Margarita, published by Americana Books. Her personal editor is Fontaine Wallace, instructor at Florida Institute of Technology. www.michelecampanelli.com