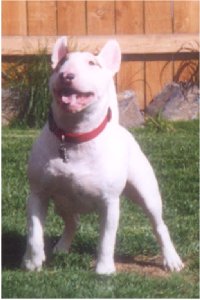 A few observations I have made this last year... I truly believe my Thor is not quite "working with a full deck" and I have to wonder if he has ANY survivial instincts at all?! *SIGH*

Incident #1) while viewing the breathtaking scenery at Pt. Waronsoff - David and Thor were standing on the edge of a cliff overlooking the ocean. Thor looks down at the sheer drop-off and decides to jump off! (thank DoG he was wearing a harness). Poor David is left standing there looking incredulously at Thor who is now dangling off the clif wagging his tail and giving a small woof of triumph! The only thing keeping him from falling to his horrible fate is his harness. (How many brain cells did he use for this?)

Incident #2) Thor will run with his tail tucked from a pug but will challenge any moose in the near vicinity (the bigger the better). (come on mom - I just wanta taste the thing!) We have had to completely block the view from our living room window because a moose comes and visits every other day or so - this drives Thor into a wild frenzy in wich he hucklebuts around the house to pick up speed and then launches himself at the picture window. I have put decals and stickers on the window so that he will "realize" there is a "wall" there - but he just gets so worked up. I even put a couch in front of the window.

Incident #3) He thinks he is small enough to sleep on the back of the couch (you know - the one sitting in front of the window?) He will be OK until he starts to dream then he always falls off! Then he gets stuck on his back behind the couch until we rescue him. We look around the room - "honey? have you seen Thor?" We both look at each other then slowly we look behind the couch - Yep! there is Thor! On his back wedged between the couch and the wall just waiting for us to find him! (tail wagging and everything!)

Incident #4) While driving down the highway at unDoGly speeds we discover that thor knows how to use the electric window opener - WAIT! He is also trying to JUMP OUT OF THE MOVING VEHICLE! AARRGGHH! (swerve, swear, swerve again, more expletives...)

Incident #5) We have discovered that Thor doesn't like to climb up the mountain but he LOVES to RUN DOWN the #%#@ thing! Imagine this: it's a peaceful afternoon - you have just CARRIED your 50-pound bull terrier up a steep mountainside trail because he REFUSED to go up of his own will. You are looking down the other side of this rather tall, wet and very muddy mountain enjoying the breathtaking view when your dog sees some small insect maybe? or maybe he has just decided that payback will be he*l for dragging him up there - he takes off at full speed with you attached to his lead. Forget trying to hold your ground - the ground is wet and muddy from the previous nights rain storm - your only hope is to stay upright and KEEP UP! OMG! The dog who wouldn't climb to save his own life has suddenly developed agility beyond measure as he drags you down this HUGE mountain side (was that a BEAR that you just slid past??!!). Your spouse yells DUCK! (in between gails of laughter)just at the time you get wacked in the face with a tree branch and you spend the rest of this descent on your back hoping your nose is not broken. When you get to the end does your dog appologize?? absolutely not! Does he make sure you are not crippled for life?? NOPE! he immediately decides to pi*s off some burrowing creature by digging up its home and kicking the dirt right at you as you lay there helplessly waiting for an airvac to rescue you.

Now after I have told you all of this you have to wonder... where was MY survivial instinct when I said Honey... lets get a bull- terrier!

- Sent in by Patricia Hall and Thor and the pug patrol