My wife and I are the proud human parents of two outstanding specimens of felinus domesticus.

Now those of you who recall your high school biology should know that to really pinpoint the subspecies, one must add a third word or "trinomial." Unfortunately, we simply haven't a clue about our cats' origins. We do, however, have evidence that one of our cats is the sole surviving member of a hitherto unknown breed. In such instances, you may know, the individuals who make the discovery have the honor of creating the trinomial.

Now before I go further, I don't want you to think I am playing favorites. Our nine-year-old cat Kidgie has been with us every day of our married life and is a truly loved member of our family. He is not the topic of this article, though. No, he is entirely too normal. Toscik, our 23-month-old cat, was adopted from a family who could not raise him. Toscik is... well, how can I state this politely... uh... unusual.

In the near future, we intend to formally submit felinus domesticus unusualus to the permanent scientific lexicon. Obviously, we don't expect the scientific community to accept such a bold claim without sufficient evidence. Nothing about his velvety-black fur, sleekly muscled body, expressive feline face and bright amber eyes leads me to classify him as a breed apart. However, I believe the reader will come to agree that this cat possesses other unique behavioral characteristics to fully justify a new feline classification.

Permit me to share my observations of f. d. unusualus in his natural habitat.

While Kidgie and Toscik have both been told in no uncertain terms to never rest their head on my bed pillow (yes, I really can communicate with them, but I'll explain that another time), and though they are equally intelligent animals, Toscik chooses to ignore my request.

As Toscik is nearly 14 in human years, my theory is that the onset of youthful rebellion commences at the exact same time for this cat subspecies as it does in human teenagers. 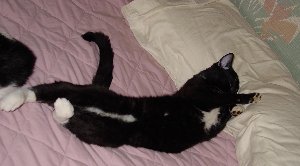 Lest you think Toscik simply misunderstood my dictate, that is not the case. He always sleeps where he is supposed to when I am around, but when I'm not, he moves to our bedroom to rest only his head and one foreleg on my pillow - in a remarkable imitation of me, I might add.

Fine, so most cats are prone to recline their whole bodies on any available soft cushion, and this cat sleeps exactly the same as a human and on a human's pillow. Not odd enough, you say. Read on.

When Toscik was still a kitten, his playtime frolics were not merely energetic. His spectacular leaps, somersaults and twists rivaled those of the National Chinese Acrobat Team. So insane were some of his maneuvers, we actually questioned his mental state. He seemed borderline suicidal.

When we would toss a toy mouse across the room, he would sprint at such great speed over furniture, tables or literally any obstacle in his path that he was usually perched on some high place waiting for the flight of the mouse to end! Usually, he would add at least one full flip and a twist somewhere along the way - for no apparent reason other than to showcase his astounding gymnastic abilities.

Then from on high, he would initiate a Kamikaze dive onto the hapless mouse. I describe the maneuver as Kamikaze because although it is commonly accepted that all known breeds of cat land only on their feet, Toscik had no qualms whatsoever about landing on his head, back or whatever. So tenacious was his pursuit of prey, he was completely willing to risk his anatomy to achieve his objective.

To add to his mysterious nature, Toscik has never - and will never - see the light of day except through a window. He is an exclusively nocturnal creature.

When he wants back inside, he is fully aware that we can't see him through the window-paned door of our back porch in the pitch black of night. So he climbs up the panes one after another until he reaches the height of our eyes. He then purposely presses only the pure white fur of his chest and lower abdomen against the glass - the only visible parts of his body - and waits. Let me tell you that when alone in the house on a stormy night, catching this image out of the corner of one's eye can be a hair-raising experience!

You'll be further dismayed to learn that Toscik exhibits prominent "vampire" fangs and oversized, bat-like ears. If exposed to direct sunlight, he emits an unnerving scream (no, not loud meows, I mean scream) and writhes in pain.

One other disconcerting thing: he sucks lustily on my wife's hair against her neck once daily. Despite my insistence that she wean him of this habit, she hasn't. She says he just misses his biological mother, and she doesn't want to hurt his feelings.

At night while my wife is sleeping, I've even checked her neck for those telltale fang marks. I'm hopeful that the genealogical research underway will not trace his roots to Romania.

Another area bound to intrigue researchers is Toscik's food preferences. While he does consume the highest quality, veterinarian-approved meat and dry mixes, the occasional heavy cream and cheese, he also has more unusual cravings. Let me ask you: does your cat eat Orville Redenbacher popcorn, crunchy peanut butter and mesquite-flavored guacamole dip? No? I didn't think so.

I must confess that initially I strongly opposed bringing Toscik into our household, but over time, my stance has softened.

The two "brothers" enjoy each other's company immensely. They greet each other in passing with their unique voices, groom each other for hours while purring and love to practice their martial arts techniques on each other. No, I'm not kidding - karate punches and kicks, legitimate judo throws, wrestling maneuvers - you name it - and all in the name of good fun. No blood is drawn.

I have come to realize that our older cat is going to live longer and happier for having had Toscik in his life. There's a lesson here for all of us. Don't be too hasty to pre-judge others who are... shall we say... unusual.

One final word. If you should ever meet Toscik, please do not mention that he is adopted - we've never told him.

ABOUT THE AUTHOR:
David Wildman is a resident of Atlanta, Georgia. He is married to Olga, formerly of Russia, and between them, they have three grown daughters. David works as a project management consultant and freelance writer. You can reach David at davidwildman@mindspring.com.